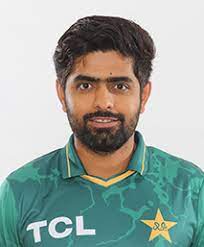 Babar Azam is the captain of the Pakistan national cricket team in all formats. One of the finest batsmen in contemporary cricket, he captains Central Punjab in domestic cricket and Karachi Kings in the Pakistan Super League. As of 05 July 2022, Babar Azam is ranked as the top batter in T20Is as well as ODIs and is the only batsman in the world to be ranked in the top 5 rankings across all formats. He is already Pakistan’s second most successful T20I captain with 26 wins out of 41.

In May 2015, Babar was named to the Pakistani ODI squad for a home series against Zimbabwe. The third ODI he played on 31 May was his ODI debut, in which he scored 54 runs from 60 deliveries. As a result of his impressive debut, he was selected for both a Test and An ODI series against Sri Lanka. Despite being selected, he did not play in the Test series. In the two ODI matches that he played, he scored 37 runs. Against Zimbabwe, Babar was selected for the away ODI series in September 2015.

He was selected for the ODI series against England at home. It was his 62 not out and 100 strike rate in the first ODI of the series that helped Pakistan win. His scores in the next three matches were 4, 22, and 51. With 139 runs at an average of 46.33, he finished the series with 139 runs.

He scored only 122 runs in five innings during the five-match ODI series against England in July. On 7 September, he made his Twenty20 International debut for Pakistan against England. He scored 15 runs off 11 balls unbeaten. As a result, Pakistan won both matches and the series.

Pakistan also played two ODIs against Ireland in addition to the England series. In the first ODI of the series, Pakistan beat Ireland by 255 runs and made a record for their biggest ODI win in terms of runs. Pakistan won the series 1–0 after the second and final ODI was abandoned due to rain. Babar scored 29 runs in his side’s victory.

No Result
View All Result